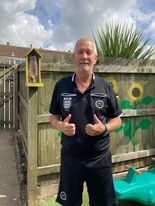 Winner of  Our Don’t  X The Line National REFspect  Award  Winner 2022 was Paul Minns, A massive congratulations to you,  We had over 500 entries for the award, It was sponsored by REF4ME who kindly presented Paul a branded referee kit including a mixture of equipment that will come in  handy when Paul officiates in his future matches.

Also a big congratulations to our REFspect runners up, in 2nd place was Adrian Pearson and in 3rd was Georgia Ashlea, who also received sponsored awards from Ref4Me, all winners also received a nice award pack from DXTL.

Ref4Me looks to bring managers and referees together on a simple booking app which enables them to book referees for matches. For further  information about what they do can be viewed on http://ww.ref4m.co.uk.

Don’t X The Line  have been going on for 19 years and celebrates its 20th Anniversary in 2023. The REFspect campaign is an initiative aimed at improving the behaviour of parents and spectators by reducing the number of incidents of poor touchline behaviour, DXTL aim is to maintain the current number of referees and also help to attract many more new referees to our beautiful game.

We know that our referees are  massively important to the game, and as we know and without them  No REFEREE No Game.

Paul, is a well established grassroots referee, who has gone through a very tough time but going by the votes Paul received he is a very very popular referee and very worthy winner, we are so glad that Paul is slowly but surely on the mend,great news for grassroots football teams and leagues.

Mal, says we are amazed at the amount of nominations we received for the National REFspect Award 2022, We know we have some amazing referees doing a wonderful job out there, and each and everyone of them are certainly doing the right thing by the comments they have all had so please keep up the fantastic work you are doing and who knows next season, could just be you.Thanks to all who took the time out by nominating their favourite grassroots referee.

Once again a massive thanks to all who took part.

On The kids Voicebox Show This Evening, We Have Special Guest And Ex Blue Franny Jeffers